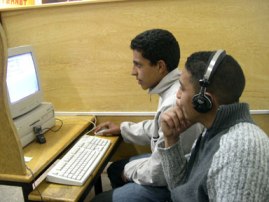 The director of police station stressed on the necessity of implementing and committing on this circular saying those will not implement it, they will have to hold the responsible for that.

"The customers should bring their identification cards with them in order to enter the internet café," he said.

The officer of Rights and Liberties in Lawyers Syndicate, Mohammed al-Maswari, said in press released a copy of which was obtained by Mareb Press, this represent a clear restriction for the liberties and rights of citizens and businessmen.

He demanded for investigation about this. He wondered whether a police station can issued such circulars without any legal verdict.

Eyewitness said that a number of policemen started yesterday evening closing some internet cafes in Sana'a city at 1am.